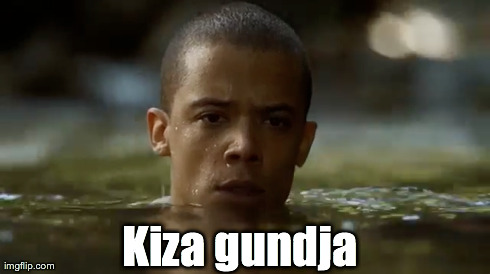 Well, after my mad rush to get my last entry posted in time, there was no actual Valyrian in the episode. So all that hassle and rushed typing was for nothing. Then of course GoT broke for Memorial Day, so in effect I had two weeks off from my Valyrian scribbles. Between the rest, and the fact that the dialog in this episode was pretty short, I managed to get a draft of this done a couple days ago, and was set to get this entry posted early, until Najahho lured me into Game of Thrones: Ascent... and of course now I wind up posting at the very last minute yet again.

So, episode titles. First of all, let me point out that last week's Vēttria "arrangements" (as the closest I could come up with for "laws") was incorrect: Papya pointed out that it should have been Vēttra. I may go correct that after tonight's episode. And of course, since it's been two weeks, I have two new episode titles to present today:

Isōpire Hontes
Mocking Bird.
OK, obviously we don't have any idea how to say "mockingbird" in High Valyrian, so I figured I'd have to go with "mocking bird," as in a bird that literally mocks. Of course we don't have a word for "mock" either. I could think of nothing I could use for "mock" in the sense of "imitate," but I did have an idea for "mock" in the sense of "make fun of": I went with isōpagon, the oblique applicative of sōpagon "laugh." So the literal meaning of this verb should be "to laugh to/for." Now, perhaps I should have gone with something like bēusōpagon "to laugh on/about," but on the other hand we do seem to have ilimagon "to mourn" (or at least AV ilimagho implies we do.)

Next:
Blēnon Peldiō
The Mountain and the Viper.
In this case we can probably get away with just calling The Viper "Snake." But, um, the less said about that particular storyline the better.

Let's talk instead about the creepy and/or cute interaction between a eunuch and a polyglot. Now since this whole dialog is in AV (and Common) I'm not going to bother to use my color code, except where other forms of Valyrian turn up in discussion.

Oof, this is tough.

In Onles matagho vaghoma nýel o volegho, the only words that are really clear are matagho "to have come" (HV mastagon), vaghoma "in order to," and o "to you." It therefore stands to reason that valegho means "to apologize" (and this is supported by the next line), but the remaining two words are much less clear. Let's deal with them separately:Do ima jinivagho valegho is slightly better. Do ima "you do not have"—perhaps AV can use "to have" with a sense of obligation, as English and certain other European languages have been known to do. Jinivagho, probably means "to go to the trouble," or so I surmise, based on the newly discovered HV verb jenigon "to bother" + -ībagon. One problem with this theory is that it would be unusual to have a e ← i shift in an open syllable, but our understanding of the rules for the interchanges between high and mid vowels are very, very poor at this point, and I can't swear that this change is unparalleled. Another possibility is to read the opening as do imajin "I don't come (to/for)" ... but then the rest of the sentence doesn't make sense. Valegho is clearly the same word Grey Worm just used for "apologize," though Missandei pronounces it slightly differently.

Jelan sko do av rudhan zughágho is mercifully easy. I almost got it on my first listen, honestly. I confess that the first word gave me a bit of trouble: it sounds rather like like jiran to me, and, since we know it means "I hope," and we don't yet know how to say "hope" in Valyrian, it should be fine if the word has no etymology. However, I am increasingly thinking the word is jelan, from jaelagon "to want." Evidence for the semantics here can be seen from a recent exchange I had with Mr. Peterson on Twitter:

Rough translation: Q: Why did Dany's army go to the river? A: They were hoping to unsully themselves. Well played, @MadLatinist.

OK, I admit I'm posting this, in part, because I'm proud of my silly joke. Still, notice that when DJP translates it, he renders jaelilis not as "they wanted," but "they were hoping." Perhaps he was thinking of the development of this verb in AV, or, even more likely, it already has the meaning "hope" in HV, in addition to "want."

The rest is all stuff we already know, but let me just remind you that AV ruhagho means, more often than not, "to cause." So the literal meaning is "I hope that I didn't make you fear."


The middle of the conversation is in Common. While I can understand that having Grey Worm learn Common makes sense for the show, I hope this doesn't start to eclipse Astapori... especially given how much DJP himself adores Jacob Anderson's delivery of his Valyrian lines!

Missandei's lines here are easy. The only thing truly new here are the verb forms lan (we've never seen this verb in the first person so far—I don't think in the second person even!) and unda (we've seen this verb in MV, but I can't remember if we've seen it in AV or not.)

Nyél sizi is a bit confusing. Sizi is clearly the same word we saw in our very first transcription, which, in that context, means "even" (cf. HV sesīr, which can mean "and now," "also," or "even"—which, as Najahho pointed out, is itself very similar to Latin etiam.) But the first word had me stumped for a long time. Initially I heard just yel, which doesn't even look AV (though it's very MV!), but then started to wonder if it was the same word as nýel above. Zhalio listened, and agreed that that was a definite possibility. If an emphatic "I" is an iffy fit for onles matagho vaghoma nýel o volegho, it is nearly perfect for nyél sizi! Compare the syntax of French and non-pretentious English, which require an "emphatic" form here: "me too."

ETA: Of course, once again, there was no Valyrian in this episode, despite my mad rush.

Also, forgot to mention that I finally realized that the reason DJP did Valyrianize the name Jon, apparently to Ionos, when he's normally pretty dead set against that kind of thing, is that Jonos is well attested as a name in the books, so it makes sense that that would be Jon's Valyrian name.
Tags: astapori valyrian, conlangs, david j. peterson, game of thrones, high valyrian, kiza gundja, linguistics, valyrian, valyrian joke
Subscribe