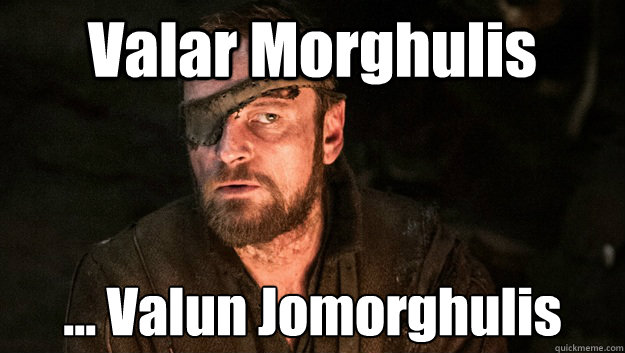 Seems like I'm always getting these done at this last minute, even when I have two weeks. This post was actually all but done on Saturday night, when I went to bed. I figured I would go over it and post it in the morning. I wanted to get it posted before David J. Peterson posted—he had, after all, promised a big, all-grammar post, which would at least render my post obsolete, and possibly even "put me out of business," as it were. I figured Sunday morning was fine, because, from past experience, I expected his post to come out Sunday night at the earliest. I was wrong. When I woke up there was a new post, and sure enough this contained a lot of information that needed to be incorporated. I figured I'd just put it off, and post as soon as I could rewrite it.

Well, as you can see, I couldn't get that taken care of all week. At least I'm consistent in always posting right before new episodes of Game of Thrones airs. ETA: OK, OK, right after it airs. Sigh.

But back to our actual episode, "Second Sons," which aired back on May 19th. Once again, there was not much Valyrian this time around. On the other hand, Mr. Peterson has taken advantage of this time to teach us a good deal more than has been usual. We will begin with some of this new information, as well as some of my theories, arranged by part-of-speech, before moving on to the actual episode.

The relevant DJP posts are:Mr. Peterson also appeared on The Jeff Rubin Jeff Rubin Show, where he gave some more useful information, but given how long it took me to incorporate SHVI, I decided to save this for a later post.